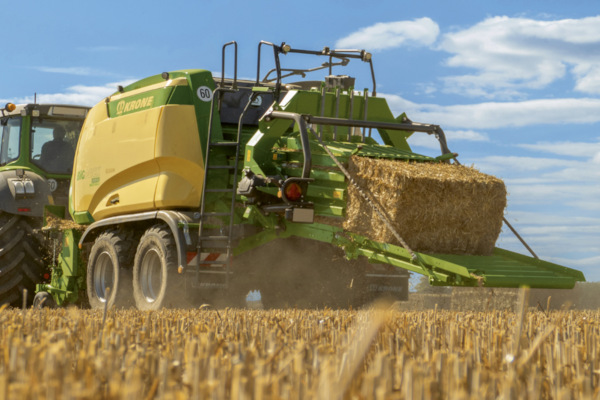 The BiG Pack 1270 offers a 120 x 70 cm chamber – a very popular size especially among farmers. Its patented MultiBale system forms one big bale from up to nine individual packs. The big packs are easier to collect in the field and the smaller packs are easy to handle and distribute in the barn. Also, the new BiG Pack 1270 produces much higher-density bales than its predecessor, a boon for maximizing transport and storage efficiencies. - Less

The BiG Pack 1270 offers a 120 x 70 cm chamber – a very popular size especially among farmers. Its patented MultiBale system forms one big bale from up to nine individual packs. The big packs are easier to collect in the field and the smaller packs are easy to handle and distribute in the barn. Also, the new BiG Pack 1... + Read More

KRONE Active Pick-up – a clever combination of the tried-and-trusted camless EasyFlow
Pick-up plus an additional powered feed roller. The two combined make a perfect match that delivers a pick-up performance second to none on the market while keeping wear to a minimum. More than that, they feed the material in an exceptionally smooth flow into the machine – regardless of whether it is equipped with cutting system or not. Increase your work rates and throughputs.

VariCut26 and VariCut51 offer machine buyers a very flexible and easy-to-use solution, a cutting system for big balers that ticks all boxes. VariCut26 with 26 blades is the best option for those who cut at a minimum length of 44 mm whereas VariCut51 with 51 blades is for those who seek cuts of half this length.

PreChop is an integral front-mounted chopping unit on the KRONE big balers of the new BiG Pack 1270 (VC), 1290 (VC) and 1290 HDP (VC) series. It has 96 rotating blades and two rows of 47 counter blades that cut the material to a nominal length of 21 mm. More than than, PreChop also defibrates the stalks visibly.

Tried and tested gets even better! In line with this adage, the VFS variable filling system has received a performance boosting update. Optimum mixing and effective pre-compression in short and different crops were not enough for the KRONE engineers. They have now implemented a feature that allows operators to control the level of pre-compression from the terminal and which keeps them informed on the current load.

KRONE has always preferred massive flywheels that are able to absorb peak loads and improve the fuel efficiency of such a big baler. All chains have been replaced by gearboxes and driveshafts for optimum efficiency throughout the entire powertrain. You won’t find shear pins on the KRONE BiG Pack drivelines but overload clutches protecting all drives.

BiG Pack features a 20% longer baling chamber that has now a full-width top plate to produce even firmer, tighter bales especially in very dry crops and at high work rates and throughputs. The on-board hydraulic system with automatic baling pressure control ensures firm bale shapes and tidy edges, even in wet conditions and in different crops.

There is no way around double knotters when the task is to make high-density bales. The technology feeds the upper- and under-thread to the knotter without tensioning them. The threads are fixed inside the knotter only for the short moment of tying the knot. This reduces significantly the strain on the thread and on the knotter increasing the reliability of the system.

The KRONE MultiBale system converts your BiG Pack 1270 into a veritable multi-purpose machine. Available as an option, the kit allows you to make huge bales and clear even large fields fast and efficiently and at the same time deliver your customers small packs that are easy to handle in the barn without a loader. KRONE MultiBale is a unique system that gives you an edge over your competitors and helps expand your business.

Sorry, currently there are no specs but check back with us later.
X Hide